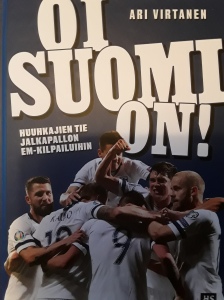 Recently, the Finnish Football Show had the honor and privilege to meet with Helsingin Sanomat Sports writer and author Ari Virtanen at the launch of the new sensational book Oi Suomi On! The book is a collection of personal accounts and behind the scenes drama that covers the transformation of the Huuhkajat from Mixu’s “kengät” back in 2015 to the euphoria of qualification. Ari himself was also good enough to take the time to answer our questions:

FFS: Ok, first up, how are you holding up in the face of Corona Virus? What’s life like for a locked down sports writer with leagues worldwide suspended?

AV: “First of all this is the time of reckoning when I realize what kind of a role the sports has in my life. I miss sports and especially football. Even without any sports events there is still a lot to write about sports. You just have to be creative and find the right angles to the stories. I haven’t yet had any problems to find something to write about.”

FFS: The story begins in Mixu Paatelainen’s dressing room in 2015, were you already considering a book back then, what led to the decision after the Greece win to put pen to paper?

AV: “The idea about the book came to my mind in November 2018 before a crucial Nations League match in Greece. I had once again climbed to Acropolis hill and contemplated there the significance of a possible group win for Finland national team. I thought that the national team had developed a lot during the past year and it could actually have a chance to qualify to Euro 2020. In December 2020 I sent out an email to Helsingin Sanomat editor who is responsible for the books we publish and I proposed the idea about doing a book about the national team’s journey to Euro 2020.”

FFS: How surprised were you by the appointment of Hans Backe? We’re you present at his press conferences? What were they like, given there had been defeat after defeat?

AV: “At that time it was not a total surprise as he kinda fitted into that mould that the FA had used. They wanted experienced coaches with a solid background from European football. I attended his press conferences and in the last ones he started to be really defensive which was of course understandable. He already understood that his position was weak after consecutive defeats.”

FFS: As a journalist and sports writer, what did you make of the Finnish media’s disinterest in the national team, and the difficulty they had in broadcasting as Kanerva took over?

AV: “The disinterest showed that Finland still had somewhat weak football culture. It was evident after Kanerva was appointed and in his first year as a permanent head coach.”

FFS: The book weaves together personal accounts, first hand conversations and text messages on some pretty tense and sensitive moments in Finland’s recent history. How comfortable was the Palloliitto about sharing that kind of info? For example, text messages about Roma’s van?

AV: “Hard to answer. I guess individuals trusted that I aimed for the truth and I would only write about facts. Maybe some people were a little bit nervous what would end up to the book, but no one complained about the end result.”

FFS: Henri Lehto may not be a household name to every Huuhkaja fan, but he’s mentioned in the book more often than many senior internationals, how important was modern game analytics and preparation to Markku Kanerva’s reign?

AV: “I’d say Kanerva’s team was as important as Kanerva himself. He found out the right people for right positions. Henri Lehto was very important person in the national team’s coaching staff. One of the key element’s of Finland’s success was the team’s ability to anticipate opponent’s tactics and found out weaknesses that Finland team could exploit.”

FFS: Having “seen the light” in early 2018 that this team could do something, when did you start believing that Finland could make it to the Euros?

AV: “I started to believe After Liechtenstein away match that they could really make it. The average point tally was pointing towards that direction and the comfortability and the self-belief that the team had.”

FFS: Where were you for the home game against Liechtenstein, and did you make it onto the pitch? If so how?

AV: “I watched the game from the uppermost row in the press stand which is in the main stand in Töölö football stadium [I prefer to call it this way instead of various and everchanging sponsor names]. No, I did not go to the pitch. I took a couple of photos of the scenes and finished my story and then walked calmly to the mixed zone. The pitch was not my place to be and I did not celebrate the achievement while I was working. Only afterwards when I ended up going to Pukki Party of Norwich City in the downtown with a couple colleagues.”

FFS: A question we always ask on the Finnish Football Show: what’s your earliest memory from a Finland game?

AV: “That’s a difficult one because I wasn’t much of a fan when I was a teenager. At that time I watched international tournaments and Premier League, but not so much Finland team. I think my earliest memory is watching the team when Ari Hjelm played as a striker. And I do remember admiring Marko Myyry.”

FFS: Finally, we are all hoping that the Veikkausliiga will kick back into gear in the coming weeks, what are you looking forward to in the coming season / who are you backing for the title?

AV: “I am mostly hoping that it would be possible to kickstart the league in the summer. For selfish reasons I hope HJK will do better than last year because it is always enjoyable to watch European matches in Töölö. And same kind of selfish reasons I hope HIFK will perform well enough so that the great Stadin Derby would continue in Helsinki. Otherwise I hope the top of the league will be tight. But who knows what happens after pandemic. We might go back several decades in a way because a lot of clubs could suffer so badly because of the pandemic. No matter how long it takes the football and the sports will survive.”

You can order the amazing Oi Suomi On! from most good book stores, and even some bad ones. Ari has also recently published a book for kids called “Matkani Futajaksi” with Johanna Harkkila both books are available in Finnish only, for now.

For a chance to win a copy of Oi Suomi On, just tell us, who is the young man below preparing to hug Tim Sparv: 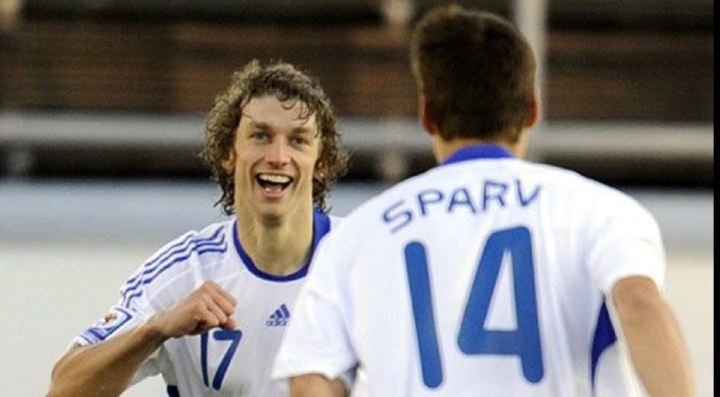 e-mail your answers to: finnishfootballshow@gmail.com with the title Competition. The winner will be announced in the next pod, so stay tuned!

One thought on “Oi Suomi On! – Interview with Author, Ari Virtanen”